Surrounded by the Philippine Sea on its Eastern coast, the South China Sea on its western coast and bounded by the Celebes Sea on the south, the Philippine archipelago is more commonly situated in the Pacific Ocean. The Philippines consists of at least 7600 islands – 2,000 of them officially inhabited – covering a total area of about 300,439 km2 (or 120,000 sq mi). Many of those islands are actually islets, the eleven largest islands alone accounting for more than 95% of the surface area. In 2017, the total population was estimated at about 104 million. Today, the Philippines is separated into three archipelagos (Luzon, Visayas and Mindanao) and seventeen distinct regions, with relatively restricted autonomies. There is one exception: the Bangsamoro Autonomous Region in Muslim Mindanao (BARMM), which, in the context of a prolonged religious and geopolitical crisis, possesses a specific status. 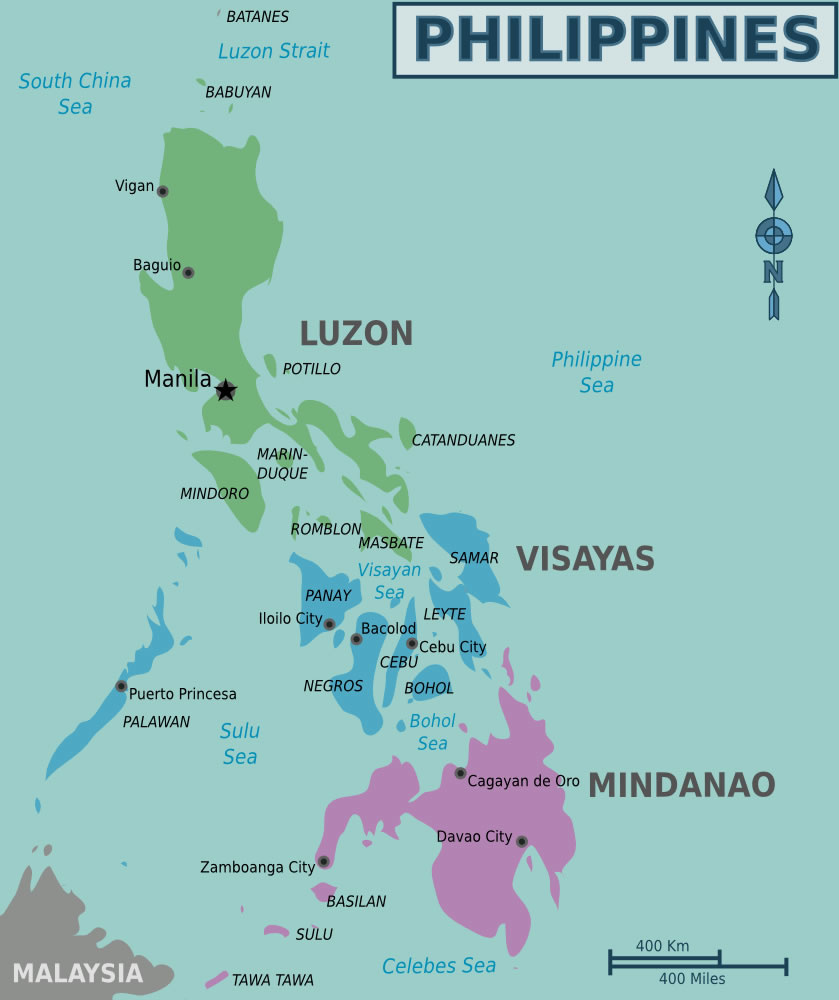 Originally made up of different populations originating from different immigration waves from the Asian continent, the Philippines is the only country in South East Asia that was colonized before even having the time to develop a centralized government or establish a dominant culture.

Not long after the arrival of a Spanish expedition led by the explorer Ferdinand Magellan, in the sixteenth century, the Philippines consisted of dispersed tribes, often polytheist, of Chinese settlements/communities, resulting from frequent commercial exchanges with the mainland, and of sultanates, under the influence of neighboring Indo-Malay maritime kingdoms, that had started to spreading Muslim precepts.

The arrival of the Spanish changed this situation through and through. The first permanent Spanish colony was established in Cebu in 1565. Manila was founded in 1571 and, by the end of the sixteenth century; almost all of the archipelago was under Spanish control. The priests had by then started converting the natives to Roman Catholicism. Were left the Muslims of Mindanao and Sulu, called “Moros” by the Spanish, who resisted and fought against this foreign domination. During this period, State and Church were the pillars of the Spanish administration, the objective being both commercial and cultural. In particular, the Spanish clergy set out to Christianize and hispanize the local peoples, banning native religious and cult practices.

The implemented agricultural policies and land laws reinforced class divides, enriching the aristocracy and new land owners to the detriment of the farmers.

The acceleration of unrestricted trade with Europe and the establishment of harbors open to international commerce saw the rise of a new wealthy social class, related to the Sino-Filipino merchant communities.

Around the 1880s, many of their children were sent to study in Europe. This led to a growing penchant for nationalism and reformism, materializing in the propaganda movement of Filipino students in Spain, led by a brilliant student, José Rizal, the author of two exemplary political books – Noli me tangere (1886) and El Filibusterismo (1891) – which have had a tremendous impact back in the Philippines. Once he returned, he founded on July 3, 1892, the Filipino league, an organization that sought to promote liberal and reformist ideas. He was rapidly arrested, made to appear in front of a bogus court and was eventually executed on December 30, 1896, at only 35 years of age. He instantly became a martyr and his death bolstered the resistance.

Inspired by Rizal’s writings and shocked by his arrest, Andres Bonifacio advocated for a general insurrection through the Katipunan, a secret society created to free the country from its Spanish colonizers.

The reasons that led to the split of the Katipunan in two rival factions have been the object of many diverging/contradictory theories. What is certain is that this divide placed the Magdiwang group (led by Bonifacio) in opposition to the Magdalo group (which wanted to place Emilio Aguinaldo at the head of the movement). Meanwhile, the Spanish troops progressed rapidly.

On March 22, 1897, a reunion – known under the name of “Tejeros convention” – was called at Cavite to solve the issue of the political direction of the revolution. Once again controversy permeated the discussions, at the end of which were born two opposing revolutionary governments: one controlled by Aguinaldo, the other by Bonifacio. The rivalry between the two men reached a climax when Bonifacio was imprisoned by Aguinaldo’s soldiers and, after having been found guilty of treason, was executed on May 10, 1897 in the mountains of Maragondon.

Many discouraged partisans abandoned the cause and gave up armed struggle. On December 14 and 15, 1897, the rebel troops of Aguinaldo surrendered and the Biak-na-Bato pact was signed: Aguinaldo obtained amnesty for all of the Katipunan’s members but the leaders were forced in exile to Hong Kong (an exile that was financially compensated…).

The explosion and sinking of an American warship in Havana in February 1898, during a Cuban revolution, contributed to the United States declaring war to Spain two months later, which in turn favoured the return of Aguinaldo and reinforced the Filipino rebellion. The Spanish were forced to sell their colony to the United States for 20 million dollars and leave the country, after signing the Paris Treaty on December 10, 1898.

Aguinaldo had in the meantime declared the country’s independence, on June 12, 1898, at Cavite. This was the establishing act of the first Philippine republic, the first democratic constitution of the Asian continent, after 327 years of Spanish domination. It became clear however that the Americans had no intentions to leave or grant autonomy to the Filipino people. On February 4, 1899, war was declared between the two. This rebellion was hastily crushed by the Americans in 1902, following Aguinaldo’s capture. The Americans ruled the country until the Japanese invasion of 1942. The Allies won back the islands in 1945 and the United States administered the country until its independence, appropriately proclaimed on July 4,1946.

Under American influence, the English language exceeded the local dialects and the political organization was modeled on the American system. Land ownership remained very unfair, favoring the richer, more politically connected parts of society, all the while serving American economic interest.

Originally made up of different populations originating from different immigration waves from the Asian continent, the Philippines is the only country in South East Asia that was colonized before even having the time to develop a centralized government or establish a dominant culture.

In November of 1965, Ferdinand E. Marcos was elected president. His administration was confronted to serious economic problems, exacerbating issues of corruption, fiscal evasion and smuggling. Facing the increasing importance of demonstrations – notably led by students – that demanded more transparency and the transformation of institutions, Marcos declared martial law in 1972 – officially, a drastic measure seeking to put an end to the alleged threats of the new Communist party and the separatist Muslim movement, but, in realty, a means to modify the institutions and assure the longevity of his mandate. One of the first measures taken was the arrest of his political opponents. In the South of the country, the separatist rebellion became more and more galvanized to act.

Under Martial law, urban crimes plummeted, unregistered weapons were confiscated but the political and economic hold of Marcos and his associated on the country was consolidated, against a backdrop of widespread corruption and contempt for the collective interest.

In 1986, Corazon C. Aquino, the widow of Benigno Aquino, one of Marcos’ political rivals who had been assassinated in 1983, became president, helped by the popular feeling of incrimination towards Marcos. She re-established a form of bicameral government as it had existed before the martial law. However, the external debt soared, the country’s economy remained in a dire stare and the menace of Moro and communist uprisings was still very real. The Aquino government was also confronted to internal dissension, repeated coup attempts and natural disasters. At the beginning of the 90s, criticism of weak leadership, corruption and human rights abuses were on the rise. In 1992, Aquino renounced to present herself as a candidate for a second term.

Following this, several presidents – all originating from the elite and important families – succeeded one another, without ever managing to put a term to inequalities or to accusations of corruption, while the conflicts with the separatists in Mindanao carried on (amounting to over 120,000 victims and about 2 million displaced over the course of 40 years). In November 2013, the Haiyan typhoon, one of the most violent ever felt – struck the country.

On May 9, 2016, Rodrigo Duterte, the long-time ruling mayor of Davao was elected president, despite (or thanks to?) his populist rhetoric, making a vow to execute 100,000 criminals. During his inauguration in June, the unlawful killings of suspected drug trafficking criminals leaped, without any trial in sight.

In May 2017, Duterte declared martial law on the island of Mindanao to circumvent the islamist and communist rebellions. Initially decreed for 60 days, the parliamentarians validated its extension at his request. This exceptional regime is an extremely sensitive matter in the Philippines, as it recalls the dark times of Marcos’ dictatorship.

Duterte, who has rehabilitated Marcos by authorizing his burial at the national heroes’ cemetery, had threatened to extend the martial law to the entire country if the islamist threat were to export itself to other regions.

Human rights organizations, which have repeatedly denounced the president’s aggressive campaign against drugs, accuse him of endangering the Filipino democracy, three decades after the revolution that drove Marcos out of power.

Tonglao S. Epinal is a photographer and a video artist. She collaborated with many specialized magazines as a freelance writer and frequently travels to South East Asia for her works and research. She is currently developing a documentary feature about the heritage of Soviet cinema and the paradox of censorship in the development of Asian arthouse cinema from 1956 to 1986.

THE HALT by Lav Diaz

Excluded from the village: poverty in Japanese society

Palme d’Or at the 2018 Cannes Film Festival, Shoplifters – not necessarily

The history of Chinese cinema

Up until the 80s, Chinese cinema was an “eminent stranger” to the

EVERY DAY A GOOD DAY is about a young woman’s